“Why then is not every geological formation and every stratum full of such intermediate links? Geology assuredly does not reveal any such finely graduated organic chain; and this, perhaps, is the most obvious and gravest objection which can be urged against my theory. The explanation lies, as I believe, in the extreme imperfection of the geological record.”1

The process of fossilization

Fossilization is a rare occurrence. Normally decomposition follows relatively quickly after death, often aided by scavengers. For an organism to be fossilized, it normally needs to be covered by sediment quickly. Catastrophic conditions often favour this. Fossilization can also occur if an organism becomes frozen or is in an oxygen-free environment. The process favours organisms with hard body parts.

The existence of fossils in sediments suggests that the sediments were laid down rapidly. The presence of a large number of fossils together may be the result of a catastrophic event. Examples of this include the Dinosaur National Monument, Utah, USA where some 1,500 dinosaur bones are embedded in the Jurassic cliff face; or the 8000 fossils, many of them dinosaurs, found during railway construction work in 2007 at Lo Hueco, Spain; or the late Miocene fossil Cypress trees, some standing up to 20 feet (6 metres), found in an open-cast lignite mine in north-east Hungary, also in 2007.

Our knowledge of the fossil record

Surprisingly most modern species have been found as fossils in a geological context. The table (right) shows the Incidence of some modern vertebrate and invertebrate creatures occurring in the fossil record. 2 Also, despite increased collecting activity, the number of new species being discovered is diminishing.The ‘collector curve’ plots (left below) showing new dinosaur species discovered in Europe and China indicates that the number of new species discovered in Europe since the 1920s has been fairly static while in China this has occurred more recently. 3

This indicates, as an example, the quality and completeness of the dinosaur fossil record. Other methods of assessing our knowledge of the fossil record have been used with varying results but they are normally based on cladistic or stratigraphic data which rely on theoretical assumptions of evolution or superposition.

The evidence suggests that arguments based on the imperfection of the geological record to justify the absence of intermediate varieties and “missing links” is ill-founded.

Incidence of some modern vertebrates and invertebrates found in the fossil record.

Quality of the fossil record in Europe and China – dinosaurs

Examples of many contemporary species can be found in the fossil record but when a specimen thought to have been long extinct is found, it is often dubbed a “living fossil”. Commenting on this from an evolutionary perspective Niles Eldredge says: “there seems to have been almost no change in any part we can compare between the living organism and its fossilized progenitors of the remote geological past. Living fossils embody the theme of evolutionary stability to an extreme degree.” 4

These are some modern counterparts to fossils from the geological record. 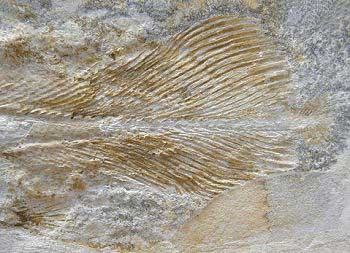 Fossil fin of a Coelacanth from Solnhofen, Germany.

Coelacanth caught off the Comoros Islands, 1974

Ginkgo as a modern plant.

An explosion of life

Charles Darwin was aware of the sudden appearance of the major groups or phyla of the animal kingdom as fossils in the Cambrian rocks. His theory, however, required infinitely numerous earlier organisms to have existed long before the Cambrian system was deposited. On this difficulty he suggested that, “formations older than any known to us, exist now only as remnants in a metamorphosed condition, or lie still buried under the ocean”.7 No evidence has been found to support such a hypothesis; nor have earlier forms of these phyla been found in earlier rocks.

Numerous discoveries have been made confirming the phenomenon known as the “Cambrian Explosion”.  Particularly well-known are those from the Burgess Shales in Canada and more recently the finds from Chengjiang (Yunnan Province, South China) which include most of the groups previously discovered although they occur at lower, earlier levels.

Despite the extensive geological discoveries since Darwin, the fossil record has not provided evidence for the evolution of life ‘from molecule to man’. An appeal to the paucity of the fossil record has to take into account that although most modern species have been discovered as fossils yet intermediate forms have escaped fossilization.

A model was developed in 1972 by two palaeontologists, Eldredge and Gould, to provide an explanation for the patterns found within species in the fossil record; this is known as punctuated equilibria.8 This assumes that species undergo long periods of stasis or equilibrium, which are punctuated with periods of speciation. To demonstrate this they compared the variations in the eye of a species of Trilobite found in different geographical and environmental contexts.

By combining the eye morphology of four closely related species of trilobite Phacops rana with their geographic distribution,  Eldredge and Gould argued that sudden change occurred after a long period of stasis during the Middle Devonian of North America. Thus the changes appear to be associated with geographical and environmental factors; the phylogenic diagrams resulting from the two approaches indicate the different conclusions reached.

On the basis of this new approach,  Professor Steve Jones, the well-known evolutionist writing in 2000, said “The fossil record – in defiance of Darwin’s whole idea of gradual change – often makes great leaps from one form to the next. Far from the display of intermediates to be expected from slow advance through natural selection many species appear without warning, persist in fixed form and disappear, leaving no descendants. Geology assuredly does not reveal any finely graduated organic chain, and this is the most obvious and gravest objection which can be urged against the theory of evolution.” 11

Adaptation to changing environments is demonstrably a mechanism in natural selection. Changes in climate and habitat revealed in the geological record link closely with change among living organisms. This can lead to extinction, the greatest of which occurred at the Permian-Triassic transition. Perhaps better known is the extinction event at the Cretaceous/Triassic (K/T) boundary which saw the demise of the dinosaurs and many other species.

The dinosaur extinction coincides with a period when the continents were moving, the global climate was changing from warm and mild to a cooler and more varied one and extraordinarily high sea levels prevailed. The flooding of land surfaces combined with low solubility of carbon dioxide in the oceans led to the formation of chalk sediments composed almost entirely of billions of microorganisms,including foraminifera and calcareous algae known as coccoliths and rhabdoliths.

There is evidence of catastrophic events at this period of change . At or near the K/T boundary in several places in Europe and America a layer rich in iridium occurs. This can reasonably be interpreted as fall-out. Whether it arises from massive volcanic activity or is the outcome of an extra-terrestrial bolide strike, or both, is a matter of debate. A number of impact craters exist, as in Arizona or the Chicxulib Crater on the Yucatan Peninsula, Mexico, the latter some 105 miles (170 km) in diameter. In India the Deccan Traps are the result of massive volcanic activity at the K/T boundary consisting of more than 6,500 feet (2,000 m) of flat-lying basalt lava flows covering an area of nearly 200,000 square miles (500,000 square km).

A radar image of the Chicxulib crater, Yucatan Peninsula, Mexico.

The contribution of changing environments on biodiversity and speciation is well established. Although the resulting changes are often interpreted as intermediate or transition stages in a mega-evolutionary process, there is no evidence that new genetic information has been generated, a necessary prerequisite to justify such a statement. Such intermediate series have been documented for a number of animals during the Cenozoic, eg camel, elephant, horse, rhinoceroses.

The transition to the modern horse (Equus) is based on size, the form of the foot and changes in dentition. It is often presented in linear form as seen on the left. The reality is better expressed in a diagram (right) which shows the relationships between geological age, geographic distribution and habitat. It should be noted that three-toed and single-toed examples have been found in contemporary contexts in the Rattlesnake Formation of N E Oregon and Ashfall Fossil Beds of N E Nebraska.15

The forefeet and teeth of selected early horses.

The adaptive radiation of the horse

The evidence from the fossil record, accumulated over centuries, is of the sudden appearance of life in the geological record, of the maintenance of the basic body forms in both animals and plants to the present day but with the extinction of some and the adaptation of others in the catastrophic environmental conditions to which life was subjected.